I was asked to write a bit about what a member can expect from their share in ROK.

The best way, I think is to show you what has been in the share in the last couple of years. Where items are not marked as kg that means they are single vegetables or average bunches. Most weeks there are also some extras such as radish, parsley and 'seconds'.

There are a few important things to say in relation to the share. First, it varies during the season and from season to season. For example, last year was generally a better year than 2014 but this showed more in quality than quantity. Having said that, the root crops did better in 2014 and the summer field crops (kesäkurpitsä, avomaan kurkku, etc) in 2015.

Second, a key characteristic of ROK is that members carry the risk as well as the rewards. Costs are kept to a minimum and there is no excess in our organisation. Without subsidies and all the other supports that make the food trade so unequal, ROK endeavours to make good food available to all.

Finally, ROK is a cooperative, activist, group. The input from the members is at least equal to the input from the employed gardener, so how well things go is in part dependent on how much effort members put in. I hope this is not off-putting because its not meant to be! In fact, this is the core point of the 'community' element in CSA. It is a chance for you and your family to get involved more in where your food comes from, how its grown, how its affected by the seasons and weather. Its a chance to remind ourselves about how important the food we eat is. 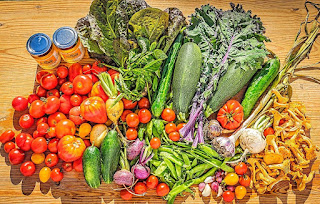 Here is an example of one of the more abundant shares from last year. The honey and mushrooms were extra (bought at the small market run alongside the share).
Lähettänyt lahdenruokaosuuskunta klo 14.13